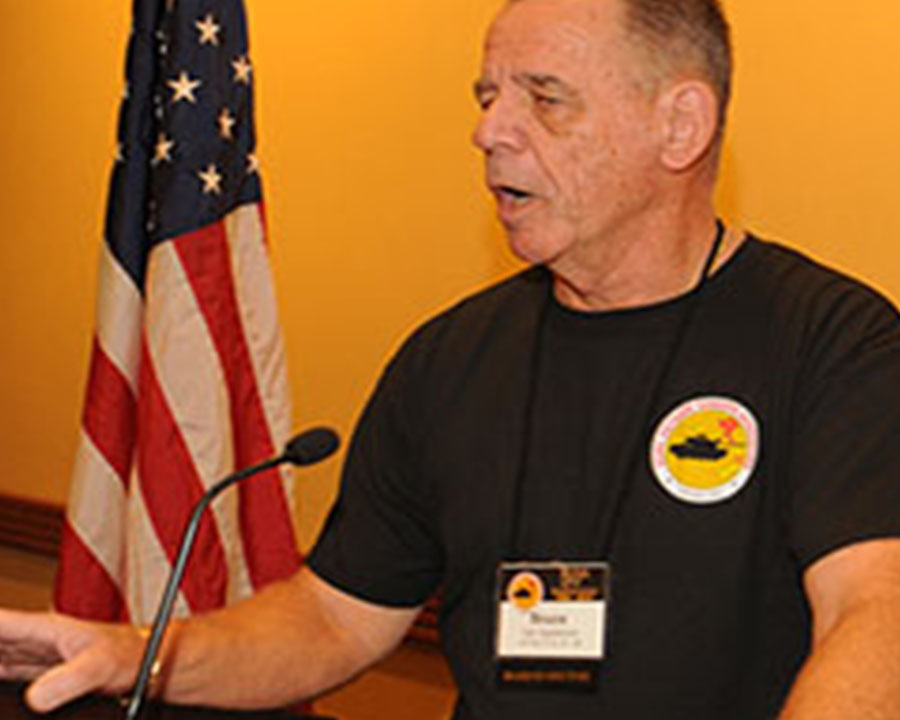 After completion of Boot Camp (MCRD Parris Island), Infantry Training (Camp Geiger/MCB Camp Lejeune), and the Basic Tank Crewman Course (Camp Pendleton) Bruce was assigned to 1st Tank BN, 1st Mar Div in Vietnam.  As a PFC he was issued an M-14 and assigned to the S-3 as a member of the Security Platoon.  For four months he was afforded the opportunity to hone his 0311 skills by going on patrols, guarding strategic structures such as bridges, building bunkers, stringing concertina wire and burning shitters.  In January of 1968, Bruce was promoted to LCpl and assigned to the 2nd Plt, ‘C’ Co, 1st Tank BN as a tank crewman.  At the end of that month the Tet Offensive started which ended a period of hunting the elusive Viet Cong guerillas and began the fighting the regulars of the North Vietnam Army.

In May/June of 1968 he participated in “Operation Allenbrook” as a Corporal.  That operation would be the focus of the book “Every Marine; 1968 Vietnam – A Battle for Go Noi Island” written by Robert A Simonsen.

Bruce rotated back to CONUS in July.  A letter from his Company Commander, Captain R. P. Hopkins, stated: “Your outstanding leadership as a tank commander under the trying conditions of almost daily contact with the enemy is appreciated.

Assignments during Bruce’s career were 2nd Tank Battalion at Camp LeJeune; a Mediterranean cruise with 3rd BN, 6th Marine Rgt; Recruiting Duty in Rochester, NY; 3rd Tank BN on Okinawa with cold weather training at Mt. Fuji.  He then retrained in Avionics as a S/Sgt. and was assigned to Marine Air Group 14 MCAS Cherry Point.  As a GySgt he transferred to Marine Air Group 32 and enjoyed a second trip to the Mediterranean.  Final assignment was as NCOIC of Naval Air Training Detachment at Cherry Point in support of the AV-8B where he was promoted to M/Sgt.

Bruce found a challenging and rewarding second career in education with his current position as Assistant Professor at the College of Business and Management at DeVry University. (Undergraduate and graduate degrees earned via off-duty education while at MCAS Cherry Point).