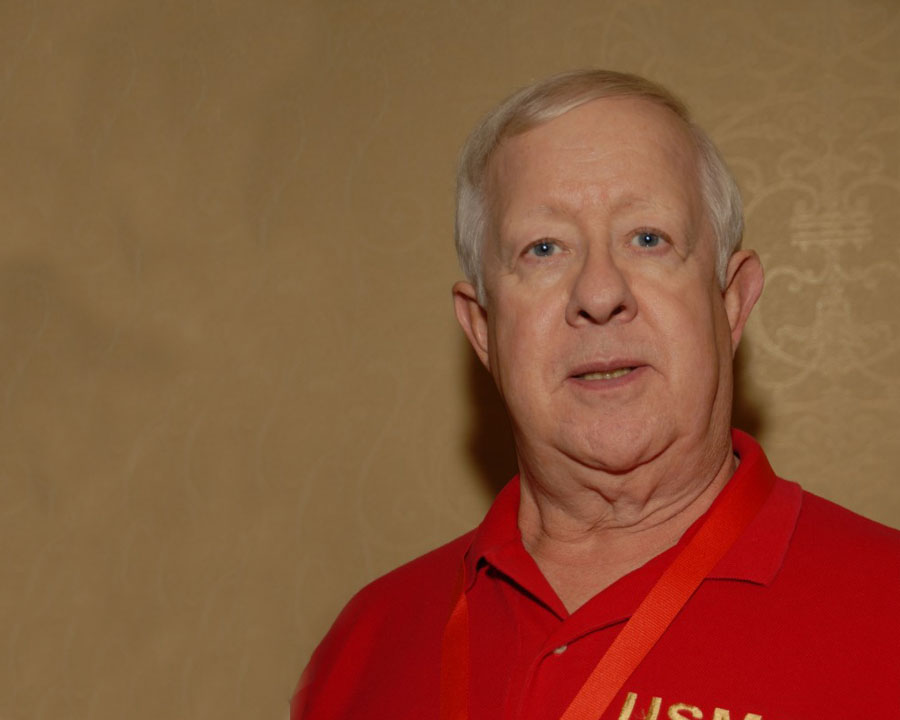 His dad was stationed in England, where he met and married Jim’s English mother. Back in Iowa his parents farmed and had a chicken hatchery. While growing up Jim belonged to the 4-H and F.F.A. farm clubs. In his small high school, he participated in cross country, basketball, track, baseball, chorus, and class plays. He was the first freshman in his school’s history to receive a varsity letter. After high school, it was on to college, where he was on the cross-country team. He successfully dodged the draft for 2 ½ years. In the fall of 1967, he dropped a human physiology class and fell below the sixteen hours required for a military draft deferment. To avoid the Draft, he signed up for a two-year enlistment in the Marine Corps.

In February, 1968, he was off to MCRD San Diego for boot camp where he served as the platoon secretary. At the completion of boot camp he was meritoriously promoted to P.F.C. Two weeks of mess duty then preceded three weeks of infantry training (ITR). Following his boot camp leave, he was assigned to area guard at Camp Del Mar and then he attended Basic Tank Crewman School. After two weeks at Staging Battalion, it was on to Okinawa, where he was assigned to A Co, 5th Tanks and the 3/26 Rear at Camp Schwab. Since the H & S Company platoon was without a tank, they were referred to as Alpha 5-0 (zero tanks). He was one of six Marines who had a “real” job – as company armor. The days in Okinawa were filled with inspections, busy-work training and boredom. To break the tedium, Jim took Jeep, PC and 6X driving training. After five months he decided to take a trip “Down South” to Vietnam, where his plane was greeted by a rocket attack at Da Nang. He was then sent to An Hoa to join 3rd Platoon, A Co. 5th Tanks in support of Bravo Co. 1st tanks. The time there was spent on night time guard duty at An Hoa and Phu Loc 6. Days were spent on road sweeps, convoy escorts, and infantry/tank sweeps. His tank was sent to Hill 55 and did some “work” in Arizona territory. In May, the platoon was re-attached to BLT 3/26 and spent time on the LSD 33 “USS Alamo,” preparing for landings that never came. After a few weeks, the platoon was off-loaded and the heavy section sent to Hill 190 in Elephant Valley and the light section went to Namo Bridge on Highway One, north of Da Nang. More nighttime guard duty and off-hill reaction force followed by daytime support of infantry platoons in the bush. In June, Jim was promoted to Corporal and later Tank Commander on A-22 “Fujimo”. Shortly before rotating home, he learned he was eligible for early release. Upon arriving at Camp Pendleton, he was processed out. So, after 19 months and 19 days, he was once again a free man. Back in Iowa, he returned to college at the University of Northern Iowa, graduating in 1971 with a B.A. in Education. In 1973, he married his wife, Bonnie. After college he worked a variety of jobs in construction, sales, and industrial management. In 1986, he completed a degree in Business Administration and took a job with the Iowa Department of Transportation as a field auditor of interstate trucking companies.

He retired in 2010 and is now the “boat captain” of his 50’ houseboat on the Mississippi River. He also manages his small” Century” farm in southwest Iowa, which is in the ten-year Conservation Reserve Program. Jim has Life memberships in the American Legion, VFW, DAV, Marine Corps League and USMC VTA. He is Vice Commander of his Legion post, the Chaplain at the VFW, Judge Advocate of the local Marine Corps League where he is also in the Color Guard doing flag presentations at various events, parades, and two to three military rites funerals per week. He is a “new” director for the USMC VTA and secretary of the USMC Vietnam Tankers Historical Foundation. He is proud to say he’s attended all of the USMC VTA reunions since Minneapolis’ in 2001. Jim has no children, grandchildren, cats or dogs. He does have three boats and three farm tractors. Jim and Bonnie are retired in Cedar Rapids, Iowa, spending summers house boating on the Mississippi at Dubuque, Iowa, and also enjoying traveling and attending U of Northern Iowa athletic events.