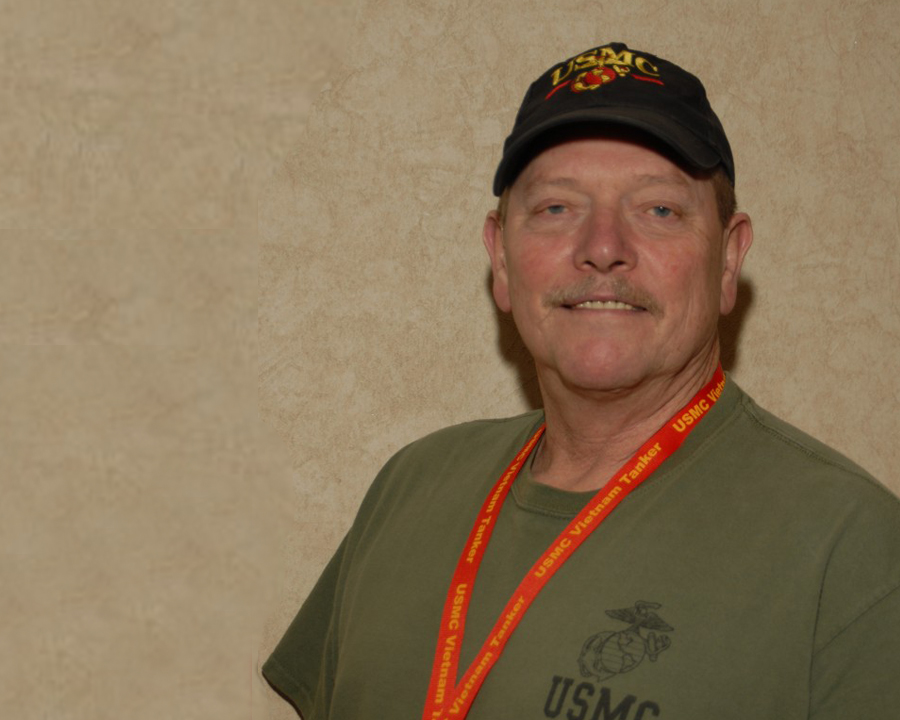 Greg serves as the VTA Website Administrator, the VTA National Recruiter and in addition he was recently voted to become a director on the Board of Directors.

He began his career with the USMC when he left home in Washington State for boot camp on February 26, 1966 as a member of Platoon 358 NCRD San Diego, CA. After 2nd ITR at Camp Pendleton he attended Track Vehicle Crewman School at Camp Del Mar. And then he served as a tank crewman in Vietnam from December 13, 1966 to December 31, 1966 Greg says: “In Vietnam I was a replacement crewman. I was sent from tank crew to tank crew all with 3rd Tanks. I was in H&S Company in Da Nang then sent to Camp Carroll with (I think) 3rd Platoon, Bravo Co. and we moved to the “C-2” firebase. I was then sent to Con Thien with 2nd Platoon, Bravo Company and then 1st Platoon, Bravo Company. My last assignment was with H&S Company at Phu Bai. After three RPG hits and hitting several mines as a driver and a gunner…and as a passenger while riding on top of 90mm ammo crates in a Six By truck, I headed home on New Year’s Eve December 31,1967. “ Decorations, Medals, Badges, Citations and Campaign Ribbons Awarded: Purple Heart with gold star, Combat Action Ribbon – Presidential Unit Citation –National Defense – Vietnam Service w/2* – VN Gallantry Cross (Unit w/palm) – Republic of Vietnam Meritorious Unit Citation – Republic of Vietnam Campaign, Rifle Sharp Shooter and Pistol Expert Greg was released from Active Duty on February 26, 1970. After his military service he had jobs as a mechanic, machinist, bartender and small business owner. In 1995 he went back to college and studied computers and telecommunications. He then worked in telecommunications until 2005. After that he was self employed again in home remolding until he fully retired in 2012. Greg adds: “The best part of going back to college was in my third year. It was the year after my son graduated from High school and he was going to the same college. We both needed a college credit in English so we agreed to take the class together. So the first day my son and I are sitting at the same two person desk. The teacher calls on us for introductions. He said Nick Martin and I said Greg Martin. The teacher asked, are you two brothers? I said no, I’m his Dad and the class cracked up. Nick beet me with a 3.6 GPA and I had a 3.4. “I was married twice and divorced twice. I have a wonderful son (Nick) his wife (Jennifer) and grandson (Owen) a step daughter (Shannon) and step granddaughter (Skye). My son’s wife works as a Project Budget Supervisor for Boeing. My son is a Project Manager also at Boeing. Funny enough, my son reports to his wife when a project needs more money. (I think it works the same at home for Nick.) My step daughter also works for Boeing in a supervisory position. So all the kids are doing really well.” Greg first volunteered his services as the webmaster during the VTA reunion in San Antonio where. He has successfully served in that capacity for over four years. During that time he also volunteered to fill in with the duties of the VTA National Recruiter. Greg adds: “After all my work. I was asked to join the Board of Directors. I could not be more proud to be a part of the Vietnam Tankers Association and in doing whatever I can to help.