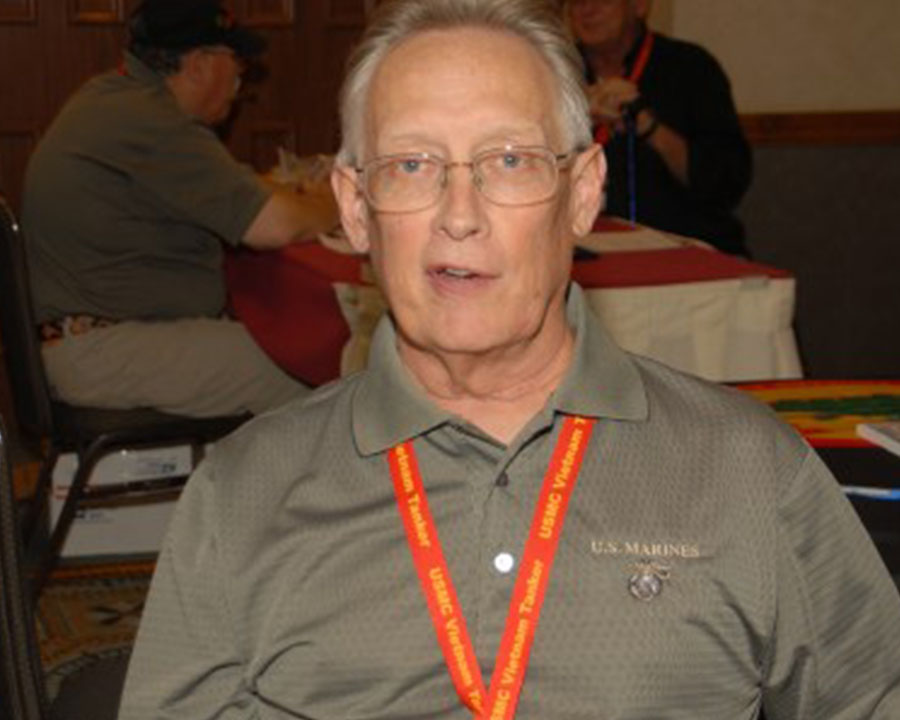 As a southern boy, grew up in the Chattanooga, TN (the Volunteer State), we played “war” almost everyday. One day we found, what we later learned was a drive shaft from a truck, and this became our 50 Cal. machine gun. I was addicted to heavy firepower at an early age.

After high school, went to Mississippi State University, a Land Grant college; therefore 2 years of ROTC was mandatory for all male students. During my sophomore year, the Colonel was after me to go Advanced Army ROTC. However, one day I noticed the Marine recruiters in the Student Union and wandered over to see what their story was. The year was1964 and few of us had heard of a place called Vietnam.

On the front of the Marine Corps Officer program brochure was a picture of a young lieutenant in the TC cupola of an M48. That did it for me; I wanted to be an Officer of Marines and I wanted a platoon of tanks. Within months I was all ready to commit; just needed a letter of recommendation from my faculty advisor. When I advised him I was going to join the Marines, he looked at me and said “Son, why do you want to join the Marines, they drink a lot and use foul language.” Needless to say I was really hooked then!

The Platoon Leader Class (PLC) program required a candidate to attend two 6-week summer sessions prior to graduation. The recruiters didn’t really tell us much other than when and where to report. My first 6 weeks were during the summer of 1965. Hundreds of college kids from around the country descended on Washington National Airport were we were herded together, loaded on buses and shipped off to Quantico, VA. for what we thought was going to be summer camp. Like all raw recruits, we were screamed at from the moment we got off the bus until the lights went out around 12:30 AM. Two candidates must have thought they signed up for the Navy because one brought his golf clubs and the other his musical instrument. So while the rest of us were lined up for our gear and haircuts, the one “shitbird” marched around the parade deck with his golf clubs at “sling arms”, while John Phillip Sousa played the Marine Corps Hymn on his violin!

Survived the first 6-weeks, but by the summer of 1967 when I went back for the second 6-weeks, we all knew where we were headed after college.

Arrived at TBS (The Basic School) in March of 1968. This was a 21-week course where 2nd Lts were taught to be grunt platoon leaders. Tet was fresh on everyone’s mind, so there wasn’t a lot of grab ass – training was deadly serious. All the instructors were Vietnam Veterans, Captains and Majors.

Towards the end of TBS we submitted our three choices for MOS assignment. Fortunately I got my first choice and upon graduation headed to Delmar for Track Vehicle School. Once there, they divided us up, some going to Amtracs and some to tanks. We spent approximately 6-weeks learning about gunnery, tactics, and maintenance. By late October, 1968 I was in Danang at 1st MarDiv with orders to 1st Tanks. Several days later, I was sent to An Hoa as Platoon Leader of B Co, 2nd Plt. After 39 weeks of training, I finally had my 5 tanks and 20 hard charging Marines!

Unfortunately the terrain around An Hoa was not like Camp Pendleton, so the infantry tactics we practiced in Delmar were of little use. Mostly we were pillboxes at night and security for the morning road sweep up to Liberty Bridge.

In December, the Co First Sergeant called down to see if I wanted to attend Embarkation School in Okinawa. I had no idea what embarkation was, but 30 days in Okinawa sounded pretty good. I remember getting up the first morning for breakfast in the Officers mess hall; scrabbled eggs, grits, bacon, hot coffee. Those of us fresh from the jungle were in hog heaven. However, one 2nd Lt from Iwikuna Air Base, Japan was complaining about the lack of “eggs Benedict”. That was the last time we sat with him and the first time I realized there were two Marine Corps – there was the ground Corps and then there was air wing!

After 6 months of An Hoa, was rotated back to 1st Tanks as Assistant S-4. The beer in the O Club was cold, and the pay was great. After 12 months received orders to Camp LeJeune. Really wanted to go back to the beaches of California so I extended for 3 months. At the end of the extension, got orders to Camp Lejeune again; thought about another extension, but the rumor mill had it that 1st tanks were headed home and not aboard a 707.

Reported to 2nd Tanks in January 1970 as XO of H&S Company. Spent the next 9 months processing undesirables out of the Marine Corps. Commandant offered an early release to officers with less than 6 months of active duty left and with Vietnam experience. I already had one interview with Eastman Kodak with a call back for another so I paid my respects to the CO and headed back to Chattanooga. Joined Kodak in January 1971 and 38 years later I’m still at it.

Married to Chris, her father was a Marine, so he and I got along great. We have a 16-year-old daughter, Mary Elizabeth.