What the heck is a Typhoon

What the heck is a Typhoon?

On the morning we are to leave for Cua Viet the company office pogue, Handler, comes by our hooch and tells us that the Gunny wants our tank down to the boat loading ramp in thirty minutes.  The navy boat arrives at the boat ramp to pick us up. It is an LCT (Landing Craft Tank) which is quite a bit larger than the Mike boats or the LCU boats that we have been using thus far.  Being the salty crew that we are, we don’t dismount to ground guide the tank on to the boat.  No, I simply talk Steffo to back on to the boat via the tank’s intercom.  If the Gunny saw us doing this he’d have a cow.  Fuck a bunch of lifers.  If we can get away with it, then we do it!  We load up our tank and an amtrack on to the LCT without a flaw. The squids raise the boat ramp, we move out and in what seem to be no time we are at the mouth of the Cua Viet River.  We hear the squids talking that there is some awful weather heading our way.   One of the Marine amtrackers on board tells us that it’s going to be a real humdinger of a “typhoon” starting tonight.

Steffo interrupts and asks, “What the heck is a typhoon?”

The amtrack commander explains that it is the same kind of a storm as a “hurricane” back in The World only that this storm is on the East Coast of Asia, so they call it a “typhoon” instead.  We off load the tank on to the south side of the river the same way we on loaded (guiding the driver over the intercom).  The boat then heads across the river to deposit the amtrack on the north side.  We report into the amtrack company office that is inside of a bunker near by.  We are ordered to hold up for a few days to see how the typhoon plays out.

The amtrack company gunny sits back in his chair and tells us, “The one thing I was to emphasis to you young tankers.  When you drive up my beach to Charlie-four, you have got to drive in the breakers…in the water.  No matter what the sea conditions are you have to stay in the surf.  On Aug 12 of this year, one of our Otters veered from this rule, ran up on to the beach and it hit a huge mine.  The company gunny from Charlie Co, 3rd Tanks and my best buddy, Gunny Claypool, was killed along with three other young Marines.  We could barely recognize the vehicle it was mangled so badly.  We don’t need to have Marines killed or equipment needlessly destroyed by not following SOP, do we now?”

At first we break out one of our large tarps and sling it over the gun tube to make a shelter.  Shortly the wind begins to whip around and our heavy tarp is blown around like a sheet of newspaper.  The storm is rapidly approaching a gale force so we take shelter in a leaky canvas tent that usually houses supplies for the amtrackers chow hall.  Just as it starts to rain in earnest we heat up some C rations and then we bed down in the supply tent.  Later in the middle of the night the typhoon intensifies and the rain driven wind blows up from under the billowing tent flaps.  I swear that the tent is going to blow away with the hollowing wind but some how it stays in place.  We have to try to sleep on the soaking wet wood floor but that’s ok since EVERYTHING is soaking wet by now.  I will swear on a stack of Bibles that there is absolutely nothing that is dry.  Thankfully the next morning, even as the storm continues it’s fury, we get warm chow in the Amtrackers chow hall, thank God for small favors.  We ask the amtrack company gunny for permission to move our gear into the mess hall and we end up bedding down for the night in relative comfort.

Early the next day, it still does not appear that the storm is going to let up much, so we flag down a passing Mike boat and ask the squids to take us across the river to the north shore.  They comply and as we off load we notice that there is a large group of amtracks in what is called a laager formation…they are all facing outward in a staggered circle like a wagon train in the Wild West.  There really is nothing in the way of a defensive perimeter or a combat base for us to wait out the storm.  As you recall we were originally planning to head to “C-4” with the large convoy of amtracks and otters but the typhoon is keeping everything and everyone buttoned up.  Normally we also would have at least one more tank to come along for covering each other on our movement.  As of now no one is moving anywhere but we have been ordered to get our butts up north at once and to be ready for the rumored upcoming invasion of the North.

I come over the intercom, “Steffo, let’s move out.”

The rain is now blowing vertically into our faces.  It stings like all get out.  I turn my face away from the rain.  I don’t know how Steffo can see to drive!  Due to heavy enemy activity in the general area, the rule for movement along the beach is that we must drive in the surf (along the part of the beach where the waves are breaking).  The reasoning is pretty clear that no antitank mine could withstand the pounding that the waves make on the shoreline so we are pretty assured that we are on the mine-free part of the beach.  As we start out on our trip north the huge typhoon induced waves are actually breaking over the top of the tank.  I am not only soaked by the heavy wind-swept rain but I am soaked by sea water.  The waves come gushing into the open drivers hatch and the surge somehow causes the escape hatch (under the driver’s seat) to come lose.  The safety wire that holds the handle in a “closed” position gets broken by the tidal surge and the heavy (150 pound?) hatch simply falls out and is lost somewhere behind us on the beach!  At the time, we are unaware that this has happened and we only discover it two days later when we drive the tank over to refuel at the “Chalie-4” OEM dump.  After one particular heavy set of wave break over my head, I look inside of the turret and I’m horrified that the sea water is swirling around “Pappy’s knees!!!  I can’t see Steffo in the drivers hatch but he must be more under water than above it!!!  To be perfectly honest, at this point, we seem to be fighting for our lives to keep on the beach and to not be washed out to sea!  Due to the total inundation of saltwater, our radios and the tank intercom are now useless.  In fact, the only thing that we get over the radios is a loud screaming noise that makes me immediately turn them off.  Boy! If we hit the shit now, we cannot call for help!

For what seems to be hours on end, waves with out end and stinging rain that seems to cut into our skin we pull into “C-4” and much to our amazement we find that it is practically abandoned. 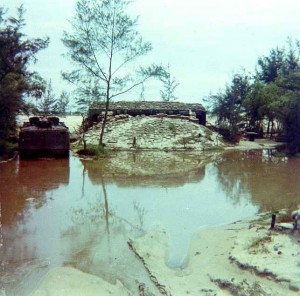